Investor, product manager and explorer—mapping my way through the crypto frontier.

Find me on Twitter, send an email, or even hire me!

For many years, my non-crypto portfolio has been the Golden Butterfly, which holds a 20% allocation to gold.

Why so much? It’s a slight modification of the Harry Browne “Permanent Portfolio”, which is based on the forward thinking idea that the economy can be in one of four states, and that a sound portfolio would hold equal amounts of the asset class that reacts most dramatically in each of these economic states, and then capture gains through both appreciation and rebalancing.

As mentioned, the Golden Butterfly is a slight modification, tilting the allocation ever so slightly towards stocks:

When people look at this portfolio, they almost universally respond in horror. With low interest rates, long-term bonds are surely going to get crushed! Gold and cash earn no yield! Only 40% stocks?

What they’re missing is that the magic is in the uncorrelated relationship between the classes. It’s the package that matters, and for as long as we have data, this allocation has proven to be one of the most stable in times of both growth and drawdown of any mainstream portfolio.

So that’s why I hold gold. Now let’s talk about how I own it.

In the early years, I had accounts with BullionVault and GoldMoney, where you purchase title to physical, redeemable gold. Working with these firms, however, felt archaic. BitGold emerged, and brought the user experience of owning gold into the 21st century, but then dropped much of their fantastic user experience, when they merged with GoldMoney. Eventually, I moved away from GoldMoney, to purchasing the iShares Gold Trust ETF, IAU.

Owning an ETF is convenient for rebalancing, but it’s still a paper form of ownership, and so I’ve been keeping my eye open for alternatives. One did appear a few years ago, Vaultoro, a Berlin-based physical gold provider. My main hangup there, however, was that it’s bitcoin-based, i.e. you can’t deposit and withdraw fiat, making rebalancing within a larger portfolio a bit inconvenient.

A new solution to gold ownership has recently emerged that looks to have all the characteristics I’ve been looking for—and more! And that solution is Paxos Gold.

Paxos is the New York regulated company that issues the PAX USD stablecoin, whose market cap recently passed TrustToken’s TUSD. Pax Gold, or PAXG, is their new stablecoin product, in which each token is backed by one ounce of physical gold in a Brink’s vault in London.

Here’s what I find attractive about PAXG: 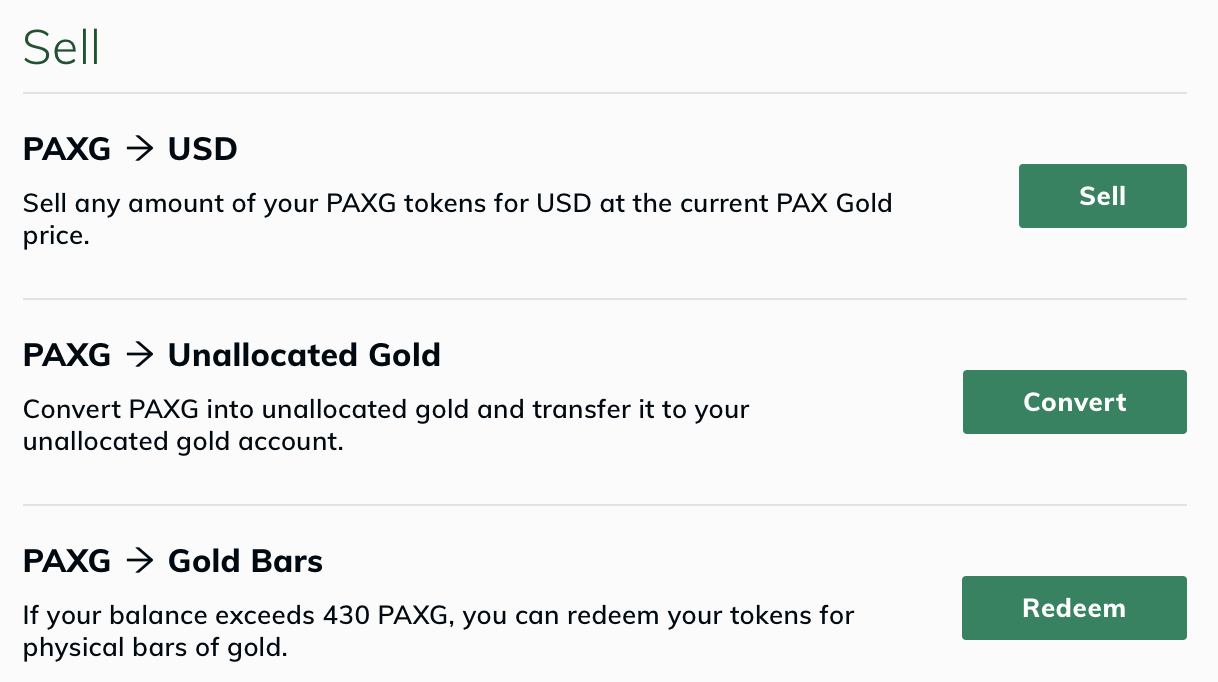 But perhaps most exciting about PAXG, is that it opens the door, for the first time, to earn yield on your held gold. For example, Nexo have already announced plans to add PAXG to the list of deposited stablecoins on which they pay 8% per year in-kind interest.

Of course, lending your gold, like lending anything, introduces third-party risks which one would need to take into consideration, but it’s very exciting to know that options to earn yield on held gold are being enabled through technological innovations like PAXG.

At the time of this writing, during its launch week, roughly $2.4M of PAXG has already been minted. With the benefits listed above, I’m excited to keep an eye on PAXG as a fascinating option for my gold holdings. (And if I end up going with PAXG, I guess I’ll have to stop referring to it as my “non-crypto” portfolio!)